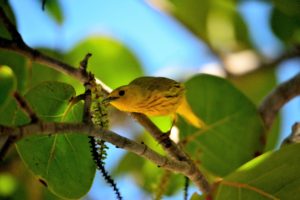 The Yellow Warbler, often called Mangrove Bird on St. Thomas, is common throughout Virgin Islands wetlands. Typically a wintering bird that is mostly observed mid-winter through spring, the occasional individual may appear during summer months.

The birds are most active along mangrove shorelines in early morning and late afternoon to sunset. They make a high pitched chirping sound and noisily dart over lagoon waters while feeding on insects, fighting each other or mating.

The Yellow Warbler has two basic looks or ‘groups’ common to certain regions. The Golden Group is typical to St. Thomas and is identified by an olive-brown crown on top of its head. The Mangrove Group has a fully rust-colored head, is rarely seen in the VI and is found in Central and northern South America. The local common names ‘Mangrove Warbler’ and ‘Mangrove Bird’ actually refer to birds in the Golden Group.

These are very small birds that camouflage well within yellowing mangrove leaves.

Adult males are identified by reddish or rust colored streaks on the underbelly. 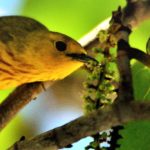