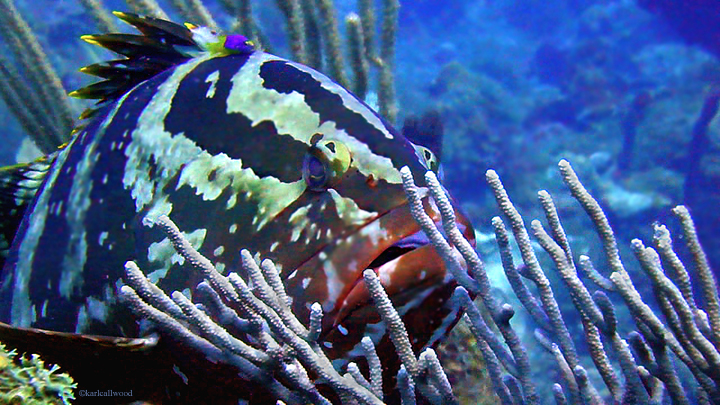 The Nassau grouper (Epinephelus striatus), once extremely common in Virgin Islands waters, is currently on the brink of extinction. Fishing this endangered species is illegal in Virgin Islands waters. Accidental catches must be properly released, a task which involves puncturing the air bladder with a needle to allow the fish to submerge. Failure to do so can result in the fish floating on the surface until death.

Nassau grouper can reach sizes up to four feet in length, though usually averaging about 2 feet as adults. In the past, these grouper could be observed in shallow waters along the St. Thomas coast. These days, if spotted, they will typically be seen in depths from 20 feet down to 100 feet.

They are often found as individuals hovering above reef tops, in cavern openings, beneath ledges and coral ridges or tucked among soft (gorgonian) coral, as pictured above. When seen in groups, it is typically for mating/spawning purposes.

These fish are extremely gregarious and curious around humans and will boldly steal fish off spears. Their friendliness is also what led to the decline of the species as they are fat, juicy targets for spear fishermen. Additionally, once fed by a human, the grouper will always come back for more.

We follow a Nassau grouper (Epinephelus striatus) to a gorgonian coral cleaning station and watch as it is scoured free of growths and parasites by wrasses. Once the grouper leaves the cleaning station, observe the ventral (underside) color changes as the stripes fade from grey-black to pale white.